Feininger. Works from his time in Weimar and Dessau

Weimar and Dessau: two small towns in the middle of Germany that represent an important stage in the life of the painter Lyonel Feininger; numerous drawings and paintings in Feininger's oeuvre testify to their importance.

In 1919, Feininger was the first to be appointed to the state Bauhaus founded by Walter Gropius and moved from Berlin to Weimar. The region was not entirely unknown to him: in 1905/06 he had already stayed here several times, as his future wife Julia was attending the School of Applied Arts in Weimar. He got to know the city and the surrounding area with her and through excursions, through which one of his most important reservoirs of motifs was revealed to him.

Full of anticipation, he explored Thuringia and encountered a world of motifs that would be used very significantly in the future in the shaping of his visionary imagery, such as the manifold representations of the church of Gelmeroda. It was a time of wrestling, letting go, and grappling – his path led him through thousands of sketches that he used to feel his way, bit by bit. These impressively illustrate his fascinating powers of observation and his evolving, ever more abstract style, which resonates with his famous oil paintings. 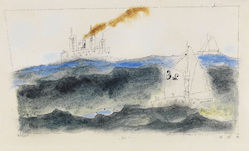