Mack. Piene. Uecker. Exactly sixty years ago. 1958. ZERO started in Düsseldorf and moved on to the world at large. Amsterdam. Milan. Paris. Tokyo. New York. And it would be more than fifty years after that that people would rediscover the significance of this movement, which was active in the creation of art and worked toward shaping society as well. In the past years, large museum exhibitions have been devoted to it in places like New York, Berlin, Amsterdam and Istanbul. The works of ZERO artists hang in the world’s major museums.

Beck & Eggeling International Fine Art are pleased to be the exclusive worldwide representatives of the ZERO oeuvre of Heinz Mack. So far, the high points of this fruitful cooperation are the realization of the monumental installation The Sky Over Nine Columns, which has been shown in Venice, Istanbul, Valencia and St. Moritz and continues to travel, and the recently published catalogue raisonné of Mack’s ZERO painting, which was put out in cooperation with the publisher Hirmer. Further, it goes without saying that Beck & Eggeling International Fine Art also possess great expertise about the other ZERO artists, as this presentation for TEFAF Spring New York 2018 goes to show

ZERO has always been in flux, continues to be in flux. ZERO defines itself around ideas, actions and exhibitions—between 1958 and 1967. After that the artists largely went their own ways, but most remain true to the spirit of ZERO, as we can see in the remarkable, flowing nail picture Strömung (Current), which Günther Uecker created in 1972 and which features in our exhibition.

Countless artists have been inspired by ZERO since 1958, and today ZERO remains as young as ever. ZERO is still making waves. 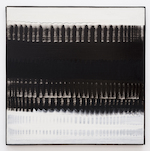