Joachim Brohm. Not a House

The exhibition shows a variety of new and individual photographs created since 2012. They do not relate to a particular thematic or serial context. The subjects of these photographs are buildings, places and things which in time or space derive from different sources but which we often come across in everyday life.

Through his specific selection of subjects, his compositional precision and muted colours which in their restraint remind one of the subtle grading of the colour grey in black and white photography, Brohm lends its own reflexive scope to the idiosyncratic combination of objects pictured in his photographs. His photos function as models for a reality which is informed by global matters and the media and in which possible levels of meaning superimpose. Despite his objectiveness and accuracy in rendering, Brohm is able to expertly pose the question of effigy and reality within photography.

In addition, also on the occasion of the Duesseldorf Photo Weekend 2015, the artist will participate at the exhibition »Human Nature« with important works from the 1980s, celebrating the 15 year anniversary of the Kunstsammlung Deutsche Börse at the NRW Forum in Duesseldorf (30th January until 17th April 2015). 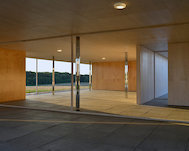