This book is dedicated to Stephen Conroy’s self-portraits, particularly the drawings on paper.
The artist lives in Edinburgh, where he paints and draws his own visage more and more vigorously. Its character is mostly serious and austere, as if he has absorbed the phrase by the English history-philosopher Arnold Joseph Toynbee (1889 – 1975), who said that the actual path leads to the inside.
The seriousness with which these self-portraits are presented leans towards a certain melancholy and gloom, though not to raise pity or stylize itself into a tragic role. Conroy has learned that thoughtfulness and pausing for a moment are the actual sources of self-awareness and thus can have an enriching effect. ...

In this Conroy ties in with artists such as Rembrandt and van Gogh, who tried to achieve similar subjective verification – the fact that the self-portrait struggles with the additional difficulty that one cannot see oneself »correctly«, but only intuitively because the mirror inverts the sides. This raises the standard and increases the tension. For the artist it entails the insecurity that aggravates the predicament: that a self-portrait moves between side-inverted seeing and being observed differently by others. No-one can solve this dilemma and each outcome rests in mysterious suspension between both poles. In this lies the ambivalence of the depiction, its fascination that also moves the observer, because the artist certainly wants to see himself also with the eyes of the other, which of course he cannot.

Herwig Guratsch, excerpt from the foreword 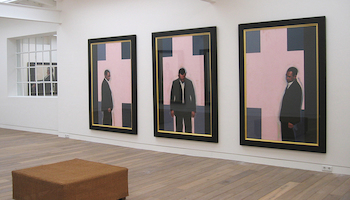 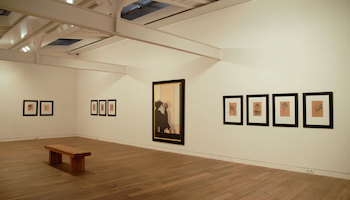